France hosts summit with leaders from Europe and Africa to discuss how to stem an influx of refugees to the continent.

Seven African and European leaders are meeting in the French capital, Paris, to discuss ways to stem the flow of migrants and refugees into Europe from northern Africa.French President Emmanuel Macron has invited his counterparts from Niger and Chad as well as the head of the Libyan UN-backed government Fayez al-Sarraj, whose countries lie on the main transit route for people fleeing violence and poverty in parts of Africa and the Middle East.German Chancellor Angela Merkel, Spanish and Italian Prime Ministers Mariano Rajoy and Paulo Gentiloni, and Europe's top diplomat Federica Mogherini will join Monday's talks.Some 125,000 people have crossed the Mediterranean by boat this year, according to UN figures, with the vast majority arriving in Italy before travelling on to other European Union members. An estimated 2,400 have died en route

"What Macron says is that he wants to see more border controls in Africa, more patrolling of the waters off the coast of Libya and more development aid for Africa," Butler said.

"His argument is that fewer people would be fleeing poverty if those countries were stabilised and had more opportunities."

In July, Macron also proposed - without consulting his allies - the creation of so-called "hot spots" in Africa where asylum seekers fleeing persecution or war could lodge a request to travel to the EU.

The comment prompted confusion, and his office later downplayed the remar

The meeting might also provide insight into why arrivals have plummeted in recent weeks from Libya, the main route into Europe since a separate pathway from Turkey into Greece was shut down in 2016.

The numbers arriving in Italy have fallen by around 50 percent in July and August compared with last year.

Niger President Mahamadou Issoufou will tell his European counterparts that the number of migrants passing through the transit town of Agadez in his country has fallen by 80 percent thanks to government efforts, a source in his team told AFP news agency.

Libya has also sought to restrict the work of NGOs operating rescue boats in the Mediterranean that pick up migrants stranded on inflatable dinghies or other unseaworthy crafts.

Italy has also sought to impose a code of conduct on the NGOs, which face accusations from some critics that their operations have encouraged migrants to attempt the crossing with the knowledge that they will be picked up in an emergency.The code has been signed by five of seven NGOs with rescue ships; only the French organisation Doctors Without Borders and Germany's Sea-Watch have refused as a matter of principle, saying they want to maintain their independence.

The code is set to be approved by all the countries attending Monday's meeting, according to the Italian news agency ANSA

Commenting on the drop in arrivals, Al Jazeera's Butler noted, however, that "there is another side to the story".

"There are reports from migrants who talk about being turned back at borders by armed groups, without actually identifying them," she said.

"There have also been reports in British media that perhaps some Italian officials have been paying people smugglers to keep the migrants back in Libya and not send them over.

"The Italian government has denied that claim, but it does raise the question how those figures have so dramatically tumbled

To implement the EU Global Strategy, decisive steps have been taken on Security and Defence. The package consists of three major pillars: new political goals and ambitions for Europeans to take more responsibility for their own security and defence; new financial tools to help Member States and the European defence industry to develop defence capabilities ("European Defence Action Plan") and a set of concrete actions as follow up to the EU-NATO Joint Declaration which identified areas of cooperation. Together the three elements constitute a comprehensive package to boost security of the Union and its citizens.

Terrorism, trafficking and smuggling, hybrid threats by state and non-state actors and other threats and challenges are directly affecting our internal security and often feed off the crises and instability in the regions surrounding Europe. "For most Europeans security is a top priority today" says High Representative/Vice President Federica Mogherini. The EU has taken action to respond. It will become a stronger actor on the international scene to promote peace and security in its neighbourhood and beyond. HR/VP Mogherini has set out how to achieve this in a strategy ("A Global Strategy for the European Union's Foreign and Security Policy") adopted in June 2016. The three interlinked decisions on security and defence are turning this vision into concrete actions.

Ministers on 14 November agreed on a new level of ambition in security and defence.  It focuses on three priorities: enabling the European Union to respond more comprehensively, rapidly and effectively to crises, in particular in our neighbourhood; helping to make our partners stronger when it comes to their security and defence; and strengthening the European Union's capacity to protect European citizens, by working more closely together on security. To fulfil these goals, Ministers also agreed to a range of actions to strengthen civilian and military capabilities, as well as EU security and defence structures and tools.

The European Defence Action Plan was adopted by the European Commission on 30 November 2016. It comprises a European Defence Fund and other actions to help Member States boost research and spend more efficiently on joint defence capabilities, thus fostering a competitive and innovative defence industrial base and contributing to enhance European citizens' security.

The Council of the European Union and Foreign Ministers of NATO adopted in parallel on 6 December a common set of proposals for EU-NATO cooperation. This follows from the Joint Declaration signed by EU leaders and the NATO Secretary General last July. The set of actions comprises 42 concrete proposals for implementation in seven areas of cooperation. EU-NATO cooperation is thus taken to a new level, at a moment when facing common challenges together is more important than ever.

Work on implementing the security and defence package has been progressing at a fast pace. EU Member States agreed to establish a first Military Planning and Conduct Capability (MPCC) that took over command of the EU training missions within the EU Military Staff on 08 June 2016.

They also agreed to work on the governance of Permanent Structured Cooperation (PESCO): one of the provisions of the treaties that has never been put in place on security and defence, which allows groups of countries which wish to do so to take forward their cooperation.

Work is also ongoing to remove the financial obstacles to the deployment of the EU Battlegroups, which are rapid response forces designed to perform military tasks of a humanitarian or peacekeeping nature. The European Defence Fund was launched in June 2017 to support Member States in their efforts of more efficient defence expenditure, less duplication and better value for money. A Reflection Paper on the Future of European Defence by 2025 was published also in June, opening a public debate on the future direction of defence in an EU of 27. Meanwhile, EU- NATO cooperation has also made significant progress in the seven areas agreed as outlined in the joint EU-NATO report of June 2017.

High Representative/Vice-President Federica Mogherini said: "We are moving fast and forward on security in the European Union. We have come a long way in less than one year and we are determined to keep this pace." 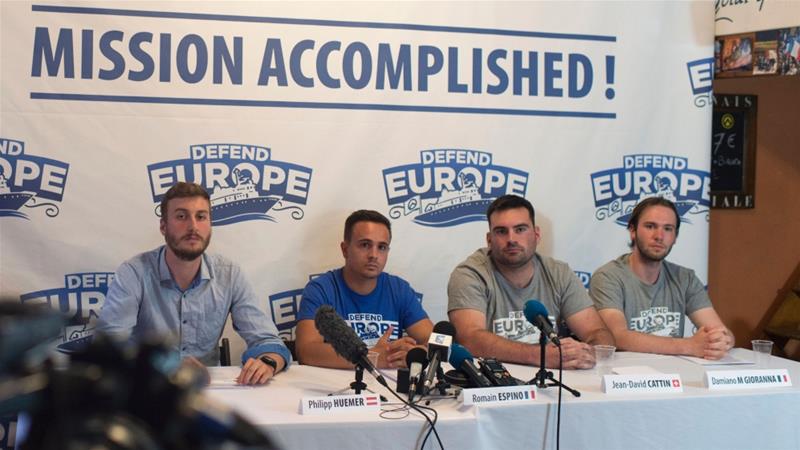 Malta has said a vessel carrying anti-migrant and anti-refugee activists was "not welcome", allegedly denying the boat from docking on its shore.

Far-right members of the Defend Europe group, who were aboard the C-Star vessel, said they were denied port access and a request for water to be sent out to the vessel, according to a statement on the group's Facebook page.

A government spokesman said the boat had not asked to dock in Malta, but indicated that such a request would have been rejected.

"They wanted to purchase services from here. There was never any kind of emergency," the spokesman told AFP news agency.

The spokesman also said that the boat "was not welcome in Malta" and that the island-state disagrees "with all that [the boat] stands for".

"Europe and Malta stand for solidarity and respect for human dignity," he told DPA news agency.

The snub was welcomed by local NGOs, who said in a joint statement that it sent a "clear message against the politics of hate and extremism".

The C-Star received similar cold-shoulder treatment from ports in Greece, Italy and Tunisia during its short-lived mission, which it ended on Thursday evening.

In the group's statement on Saturday, it accused Malta's government of "supporting human trafficking and obeying international migration supporters", adding that it was a "historic disgrace".

It launched a petition to call on Maltese government to allow the C-Star vessel to dock.

While the group said their month-long mission was successful, its crew was never able to act on its threats to take any distressed migrant and refugee boats it came across back to Libya - a move humanitarian organisations had warned would be in breach of international law.

The C-Star crew comprised 25 members of the Identitarian Movement, a pan-European conglomerate of activists who rally against Muslims and refugees.

The movement can be traced back to France in 2002 when the far-right Bloc Identitaire party established a youth wing.

Defend Europe said it had received more than $115,000 donations for its work.

More than 118,000 refugees and migrants have arrived in Italy, Greece, Cyprus and Spain by boat via the Mediterranean Sea this year, according to the International Organization for Migration (IOM).

Last week, a German aid group said it was suspending its refugee rescue operations in the Mediterranean over security concerns after Libya barred foreign vessels from a stretch of water off its coast.

Doctors Without Borders (known by its French initials, MSF) also said it was halting the use of its largest boat in the area because of an "increasingly hostile environment for life-saving rescue operations".